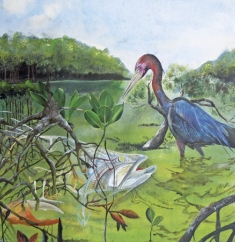 “I believe I have been richly blessed with my family that surround me and the people placed in my life; these are my true motivation and inspiration.”

Benjamin Lee Hodges was born in Cairns in 1978 where he has lived most of his life. Hodges is currently residing at Batavia Station, a remote cattle station located in the northern region of Cape York Peninsula in Far North Queensland, where he works as a station hand.

Hodges has been a practicing artist since as long as he can remember. Hodges developed his practice through drawing, dabbling in graffiti in his earlier years and then progressed into painting and printmaking among other things during his study at Cairns TAFE.

Although painting is his preferred medium, he has recently begun etching and exploring the vast diversity of techniques that etching offers, bringing with it results that further enhance Hodges’ unique but layered vision of the world and his culture.

Hodges has studied visual arts in numerous institutions as well as working as workshop facilitator in schools, correctional centres and youth programmes where he has gained the most fulfilment and satisfaction from his practice. Hodges dream is to become a qualified art teacher in the future and utilize his skills in helping people. Hodges believes that through art he can bring a little hope and direction to peoples lives by creating a greater awareness of their cultural identity and promoting the positivity that culture brings through art.