To facilitate and provide resources that foster a fine arts and craft program throughout the Western and Northern Cape that has a focus on product development, marketing and promotion, arts education and training, and arts business.

In 2007 a Weipa public meeting addressed the viability and necessity of an artist run organisation to support and promote Indigenous art in the Western and Northern Cape York.

A facility in Weipa was identified to run arts-based courses for artists, including developing creative and business skills. It became known as the Art Centre. The Art Hub concept was developed as a collaborative initiative of community and government representatives. This is what is now known as Wei' Num.

Founded in Weipa in 2010, by 5 artists from Napranum, Weipa and Mapoon.

Wei’ Num grew from an initiative that was funded by DEEDI in partnership with Western Cape College and TNQI TAFE. Wei' Num's vision is to empower indigenous artists to take ownership of their individual arts businesses and to create economic certainty for themselves and their families.

Wei’ Num delivers arts and craft based business and professional development opportunities for artists (and also communities) living in Weipa, Napranum and Mapoon. In time, it is aimed to extend the services of the Corporation throughout the Western and Northern Cape York to the communities of Coen, Aurukun, Pormpauraaw and Kowanyama, and to the communities of the Northern Peninsula Area: Seisia, New Mapoon, Bamaga, Umagico and Injinoo.

Wei’ Num also supports the growth and recognition of ‘the arts’ as an important industry, which in Indigenous communities has the capacity to provide education and training opportunities in arts practice and business, economic growth, cultural maintenance and retention, employment, and community engagement and pride. 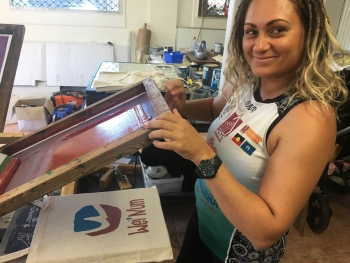